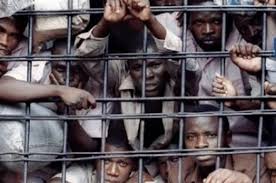 Thirty-five inmates have been released from three Correctional Centers in Kogi State.

The State Chief Judge, Justice Nasir Ajana, who ordered their unconditional release, said it was in line with the President Muhammadu Buhari’s directive to decongest Correctional Centers nationwide in view of the COVID-19 pandemic.

Justice Ajana said some of the inmates released were charged for civil matters, while others were set free on health basis and some have stayed beyond the time limit of the offences committed.

According to the Chief Judge, no inmate charged with offences bothering on security was released and those set free were directed to go on self-isolation and change their ways of life.

Highlight of the exercise was the presentation of sanitizers, face masks, buckets and toiletries to the Centers for use, as well as transport fare for those granted pardon.

The Correctional Centers visited include that of Kabba, Kotonkarfe and Okene.