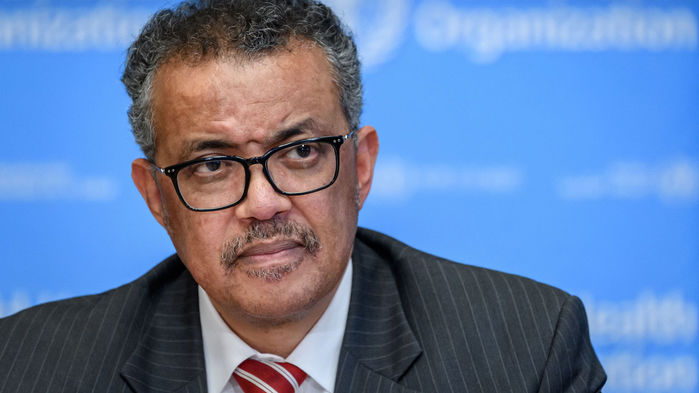 World Health Organization (WHO) Director-General Tedros Adhanom Ghebreyesus attends a daily press briefing on COVID-19, the disease caused by the novel coronavirus, at the WHO heardquaters in Geneva on March 11, 2020. – WHO Director-General Tedros Adhanom Ghebreyesus announced on March 11, 2020, that the new coronavirus outbreak can now be characterised as a pandemic. (Photo by Fabrice COFFRINI / AFP) (Photo by FABRICE COFFRINI/AFP via Getty Images)

Days after the World Health Organisation (WHO) expressed optimism that the COVID-19 pandemic will end in 2022, a new strain, IHU, is causing panic in France.

The “Variant IHU” or B. 1.640.2 has become a source of concern to countries, health experts and institutions.

No fewer than 12 persons infected near the South of Marseille are receiving treatment at a hospital, with fears of more undetected patients.

IHU, linked with travel to Nigeria’s neighbour, Cameroon, has 46 mutations. More alarming is that it is more resistant to existing vaccines.

However, the strain currently do not spread as fast others. The WHO is expected to commence an investigation soon.

First found by The Méditerranée Infection University Hospital Institute (IHU) researchers in France, reports suggest the variant may have entered the United Kingdom.

IHU Professor Philippe Colson, head of the department that discovered the variant, had provided insights in December.

“We have several cases of this new variant in the Marseilles geographical area. We named it ‘variant IHU’. Two new genomes have just been submitted”, he wrote.

The paper published in an online medical journal disclosed that the index case was a fully-vaccinated man who returned from a trip to Cameroon in November.

Colson said detection by qPCR of three mutations in the spike gene to screen for variants, revealed an atypical combination with L452R-negativity, E484K-positivity, and E484Q-negativity.

The expert noted that the result did not correspond to the pattern of the Delta variant involved in almost all SARS-CoV-2 infections.