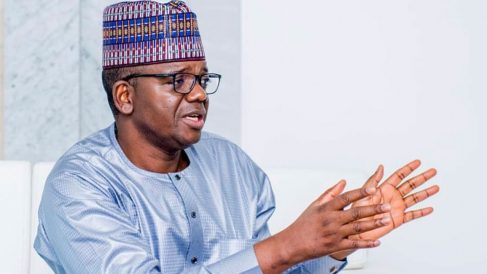 A group, Arewa Development Forum for Peace and Justice, on Sunday rose from its meeting in Kaduna to declare its solidarity with Zamfara State Governor, Bello Matawalle over his call on Nigerians to legally acquire firearms to defend themselves against incessant attacks by terrorists in the state.

Its Chairman, Alhaji Zubairu A Mustafa, faulted what he described as “the negative reactions” by some Nigerians over the suggestion of Zamfara State governor, bemoans “discouraging comment” by the Chief of Defence Staff, General Lucky Irabor, and other elites who were not sincere with realities of kidnapping, killings and attacks of the communities in the northwest region and other parts of the country by suspected bandits.

This was coming a few days after reports of alleged attacks and kidnap of many people by bandits in some villages in Kaduna, Kebbi, Niger, Katsina, Zamfara and Sokoto states in the country went unabated.

The group noted that the multifaceted crime against the Nigerian state and Nigerians has continued to thrive without any serious strategies in place to end the challenge by the security operatives, saying that they are awash with news from some higher-ranking officers in the security echelons and elites that they are not in support of public bearing arms for protection.

The group added that the groups of Nigerians are openly frustrating the efforts by the government of Zamfara state towards empowering communities to acquire and carry arms legally to protect themselves against the rampaging invading terrorists that have made peace impossible in their ancestral homes.

It stated that on Thursday, June 30, at the funeral prayers for a slain priest in Kaduna, the Catholic Archbishop of Kaduna Diocese, Most Rev Mattew Man-Oso Ndagoso openly supported the decision of Governor Bello Mutawalle of empowering and allowing citizens to carry arms legally to protect themselves against the incessant killings by the ravaging criminals.

The Catholic leader also referenced Governor Aminu Bello Masari of Katsina State who had earlier suggested the same thing as the only way to complement what the military and police are doing in the fight against terrorists in the region.

The group explained that for those saying it’s not right and disastrous if citizens are allowed to protect themselves in self-defence against the bandits, asking who is supporting or licensing those invading bandits to continue maiming and killings by using AK-47s and other dangerous weapons in our region?

It stated that leaders must act now or Nigerians would continue to be a target of elimination by minority marauders going about with weapons against the majority.

The group explained, “If the government refused to act now, they should know that when people are frustrated, they will look for the best option for themselves which is to arm themselves. Many people around Zamfara, Kaduna, Katsina and Sokoto states who are victims of such carnages have endorsed the Zamfara state government’s idea.”

The group further explained that Southwestern states have brought down the alleged criminal animal rearers’ attacks on their communities by about 75 percent as a result of their vigilante outfit group known as AMOTEKUN in collaboration with community patrol volunteers is open to all, saying that they bear arms and move around with an ale of confidence and fight against insecurity in their areas.