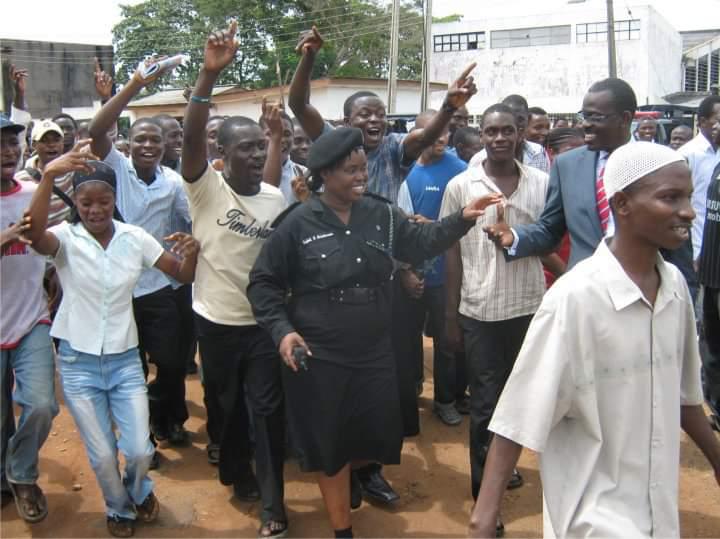 DCP Sybil Olufunmilayo Akinfenwa is no doubt a fantastic policewoman. She is in fact not your regular police officer and she cannot be compared with the rogues you see on the road. Especially when you consider the way she applies emotional intelligence to the job. She is arguably in a class of her own.

When our path crossed 14 years ago in Ibadan, she was already a star policewoman popularly known as Iya Agugu, later to be called Iya Sango. That was the norm everywhere she served as DPO. The talk of her kindheartness spread round the city as she mixed strategic policing with welfarism to suit the lifestyle of Ibadan people.

Anywhere there was security threat in the state, Olufunmilayo Akinfenwa would quickly become the solution. I recall the day The Polytechnic, Ibadan Students’ Union Government, 2009 set was inaugurated and Agodi police station got the first baptism of fire from the newly inaugurated students’ executives for damaging our Students’ Union bus due to their negligence. The then state police commissioner, Baba Bolanta shortly after, posted DCP Sybil Akinfenwa to Sango Division purposely to handle us.

Unlike Agugu, Ogbere Idi-Obi where she came from, policing Sango Division was a different challenge. Particularly because of the two gaint institutions in the area: University of Ibadan and The Polytechnic, Ibadan. Of course, students cannot do without Aluta. That is not to add the major motor parks, Ojoo and Sango garages where NURTW boys can also forment trouble. In all of that, the superwoman performed excellently well.

When I saw her 32nd anniversary as a police officer yesterday on Facebook, one of the situations she managed quickly came to my mind and I thank God for her life.

It was a Tuesday morning and I was still in bed around 4:30am when my phone rang repeatedly to wake me. The caller, one of the student leaders did not waste time on details as he quickly dropped two lines message. “PRO, protest has started on campus oo. They have locked the school main gate” he ended the call. As short as the message was, it was very clear to me that the students were on rampage. So I quickly jumped out of my bed.

The protest actually started from two major hostels, Orisun and Unity. The campus had been in a total blackout since the school generator developed fault. Student’s who had been complaining of poor power supply from PHCN for more than two months fed up and started the demonstration.

Before 6am, DCP Sybil Olufunmilayo Akinfenwa and her men were already on campus. She had been briefed of the situation and appeared fully ready for the job. In a short meeting with the student leaders she asked to join the protest march and also pleaded to be in control. We obliged based on her reputation and then traveled together to Dugbe where the PHCN office was located.

Mama Sango coordinated the meeting at the PHCN office and she almost succeed with her plans before one of the PHCN senior officers messed up her PR efforts with lack of speech control and mob management. The man goofed while addressing the protesters saying there was nothing they could have done to generate power. He even pointed to a corner where their generator was kept and said that was why they also have generator in their office.

The statement upset the already angered students and they were about to lynch him. Thanks to the swift response from the police officers led by DCP Akinfenwa. The students however insisted that he follow us to our campus to see for himself what we were going through without power supply. DCP Akinfenwa at that point could not stop over fifteen thousand students. More so, the officer brought the trouble upon himself. What the smart DPO did was to agree but insisted that the man sits in her car while we take him to the campus.

The clueless PHCN man on getting to the campus eventually became sober and was vibrating as he bursted into tears. He started showing symptoms of high blood pressure when he saw another crowd on campus waiting for him and shouting, ‘bring him, let’s deal with him’. He later confessed that he has never seen such a crowd in his life gathered because of him except in crusades.

Immediately we entered the campus, DCP Akinfenwa ensured that he was safely transferred to the management building where he was tutored the proper way to address the students. But before then, his office had been mandated to divert power supply anywhere in Ibadan to the campus just to arrest the situation. He made the call to free himself and that actually worked because the protesting students dispersed immediately they saw the light.

That was not the end. After we had safely returned the man to his office and we have also settled in our hostels. The school management met and started their game. They claimed they were embarrased by our action and decided to rusticate some of the students leaders that led the protest. My name was top on the list.

DCP Akinfenwa who had also retired to her office rushed back to the campus immediately she heard the news. It took her hours to defend us because she was part of the protest and in her assessment we were not violent but comport ourselves. What she wanted was justice against intimidation and she got that in our favour.

Apart from being the voice of the voiceless and defender of justice, there were other features that earned her our respect so much that all students in our generation treated her as mother.

She eventually made the cover page of our final year magazine with the major headline, ‘Where men tremble, I succeed’.

May God continue to protect her and keep her. Congratulations ma.