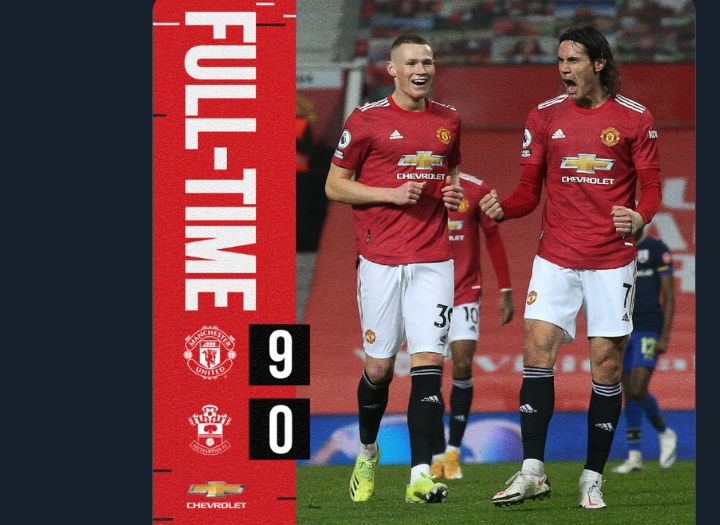 Manchester united put 9 goals past Southampton in a stunning match at Old Trafford as they moved level with current league leaders ‘Manchester City’.

Manchester united came into this match knowing that they had to respond by returning to winning ways after a disaster class at Old Trafford against 20th place Sheffield, and an uninspiring draw against Arsenal last weekend, and the team responded in style.

Southampton started horribly as Jankewitz was sent off 79 seconds into the match, Man Utd room advantage of this as Wan Bissaka gave united the lead following a cross from Luke Shaw.
Marcus Rashord then doubled the lead, and he was assisted by Mason Greenwood.

Bednerak then scored an own goal, and Cavani headed in from a second Shaw assist, as Man Utd finished the first half with 4 goals.

The nightmare wasn’t over for Southampton however as Bruno Fernandes assisted Martial, before Mctominay scored a fierce drive from long range.

Bednarek was then sent off after he conceded a penalty, the penalty was converted by Fernandes.

Martial then scored his second, before Daniel James scored the ninth goal from another Fernandes assist.

United tie their own 9-0 win over Ipswich Town in 1995 and Leicester City’s victory by the same scoreline at Southampton in 2019.