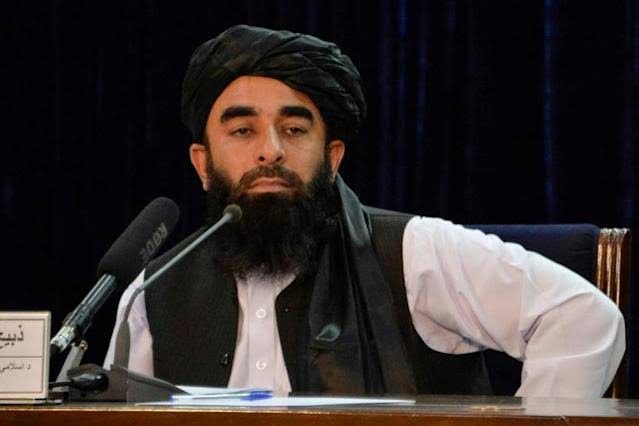 The Taliban’s spokesman says the hardline Islamist group will crack down on Islamic State attacks and expects them to end once foreign forces leave the country.

“We hope that those Afghans who are influenced by IS… will give up their operations on seeing the formation of an Islamic government in the absence of foreigners,” Taliban spokesman Zabihullah Mujahid told AFP in a weekend interview.

“If they create a situation for war and continue with their operations, the Islamic government… we will deal with them,” he added.

A devastating suicide bomb attack claimed by IS outside Kabul airport on Thursday killed scores of people who were hoping to flee the country, as well as 13 US service members.

Retaliatory or pre-emptive strikes by the United States on IS positions over the past few days have angered the movement, however.

The Pentagon said it carried out a drone strike Sunday against a vehicle threatening Kabul airport that had been linked to IS.

“There is no permission for them to do such operations… our independence must be respected,” he said.

The evacuation of tens of thousands of foreigners and Afghans who feel at risk of reprisal or repression under the Taliban is due to end on Tuesday, along with the full withdrawal of US and NATO troops.

Islamic State has been highly critical of the troop withdrawal deal struck between the Taliban and Washington last year, which saw the Taliban offer security guarantees.

One IS commentary published after the fall of Kabul accused the Taliban of betraying jihadists with the US withdrawal deal and vowed to continue its fight, according to the SITE Intelligence Group, which monitors militant communications.

During the Taliban’s prison break spree this summer to free its fighters, many battle-hardened IS militants were also released — increasingly looking like a lethal error.

‘Technical problems’
Although both groups are hardline Sunni Islamist militants, they have differed on the minutiae of religion and strategy, while each claiming to be the true flag-bearers of jihad.

In recent years, the IS Afghanistan-Pakistan chapter has been responsible for some of the deadliest attacks in those countries.

They have massacred civilians at mosques, public squares, schools, and even hospitals.

Mujahid reiterated that the new Taliban government will not be announced until after the last US soldier has left.

“It is important to announce the government but this requires a lot of patience. We are holding consultations to form the government responsibly,” Mujahid said.

“We have some technical problems on this issue,” he added.

Banks, government offices and other public institutions remain largely shut with employees prevented from entering offices since the takeover, which sent the Afghani sliding.

The Taliban have promised to improve Afghanistan’s economy, but to do that the new regime will have to rely on foreign aid — and there is no guarantee it will get the funds it needs.

Read More  US sanctions Cuba for crackdown on protests